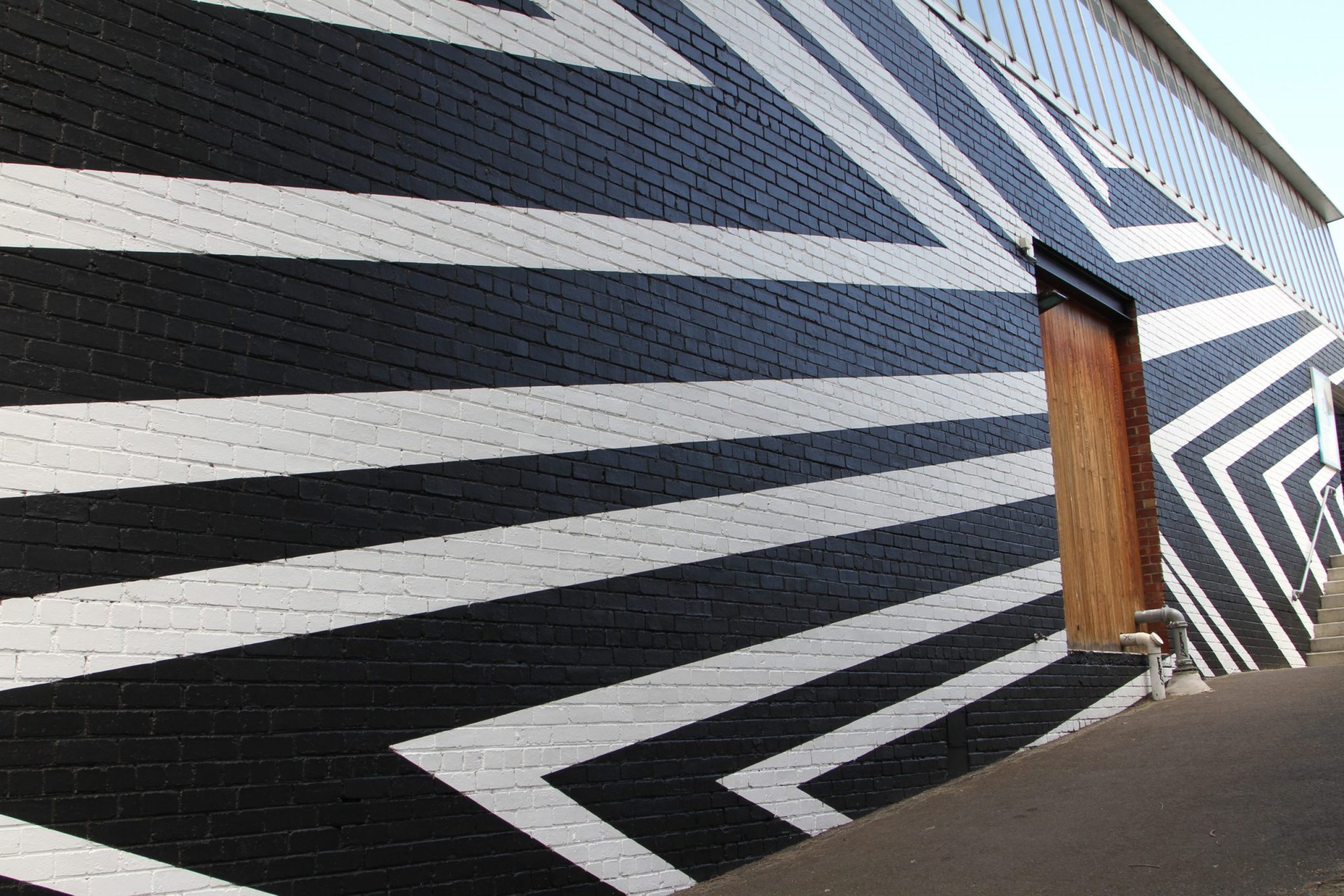 Our Iconic Brook Andrew ‘Marks I’ Mural Restoration is Underway

The History of ‘Marks I’

Warehouse building and its striking black and white facade. This is Marks I by Wiradjuri artist Brook Garru Andrew, a wall painting measuring 40m long and 6m high, created in 2012 with extensive community involvement. One of the most significant public artworks in Footscray, this work is instantly recognisable and has been visually synonymous with art and activism in Melbourne’s West over the last decade.

Brook generously donated the distinctive black and white design, created specifically for the site. The zig-zag pattern, commonly used in his work, is inspired by traditional Wiradjuri carved shields and trees. Brook notes that the optical design speaks to the tendency in Western society to perceive culture as binary and hierarchical, promoting one identity while pushing others into the dark. The use of a design inspired by traditional Wiradjuri culture acts as a reminder of the significance of cultural continuity in the face of these oppressive systems.

“I remember how hot it was out on that wall. All up I think it took 4 – 6 weeks. Brook remarked that, up until this point, his wall paintings had been about getting as crisp a line as possible. Here on the external wall we had to contend with mortar lines and irregularities in the bricks- pushing spiders out of cervices before painting each section”, says Michael Brennan.

Marks I was realised with extensive community collaboration and support. Dulux Australia donated the paint, wall preparation was volunteered by Melbourne Feature Walls, with further support provided by Stralliance Developments and Watersun Homes. The generosity and contribution of local community and artists in realising this work cannot be understated. In December 2011, 25 local community members and artists participated in a painting weekend to realise Brook’s vision.

“There were lots of great conversations to be had as well – with the artists and community that contributed as well as the community that would drop by and ask what was going on. It’s so good to know that it’s being restored”, continues Brennan.

After 9 years of exposure to the elements, Marks I showed considerable damage, including extensive water and sunlight damage causing staining, fading and flaking of the paint surface. With the hope to restore this iconic artwork, Footscray Community Arts launched a campaign in 2020 to raise the funds required to clean, refit and repaint the mural. With the generosity of over 50 donors, we were able to undertake this important work.

In September 2021, after almost a year of planning and consultation with Brook and professional restorers, a team of professional painters worked to remove damaged paint, reseal the mortar, and start applying a fresh coat of paint.

“The work you [Footscray Community Arts] do and this upkeep of the work is so wonderful – thank you!”, says Brook Andrew.

While our doors remain closed, we are proud to present this newly restored work to the public. With the help of our generous donors, artists, community and staff, Marks I remains an integral part of the visual fabric of Footscray, marking space for creativity and activism, to be enjoyed by the community for years to come.