FCAC Writes is a collection of new work by writers from Melbourne’s West and beyond, published online.

In the context of the current pandemic, it is irrefutable that artists’ lives and creative processes will continue to be altered for some time to come. In response, FCAC has invited local writers to explore potential and realised impacts for themselves, in their personal, social and political realities.

Through creative fiction, collaborative pieces and reflections, the writers ruminate on these questions:

Where are they drawing joy, solace and support?

As artists and community organisers manoeuvring an unraveling climate of disruption and uncertainty, what possibilities do they begin to imagine?

Have new ways of being in community emerged, or existing networks and relationships deepened? What must writers encounter on the blank page?

In October 2019, I saw a psychic who was fortuitously recommended by a friend. Excited about all the positive reassurance and clarity she was offered. I needed some for myself, because hey, why not. I was due some serendipity…

heaven towards what
Darlene Silva Soberano

In an interview with Thora Siemsen, Kaveh Akbar says: ‘What a poem does is makes what is familiar to us new again.’ For this reason, I frequently cite ‘Object Permanence’ by Nicole Sealey as my favourite love poem. It is a poem that makes love strange—and therefore new. The beloved, for example, is ‘the animal after whom other animals are named’; the human is returned to primacy.

I was supposed to travel to London this June, to take part in a summer school for people interested in theory: which I am, even if I am not interested in London, a city where, I find myself remarking often, every second white person seems, to judge from their facial expression, as if they have just stepped in shit. Instead I remain inside my home, and take part in the classes online.

Took about six weekly overdrawn notifications and driving to Cabramatta’s deposit ATM at 11pm last year to realise that being broke wouldn’t cut it anymore. I’d run out of grant money in February, applied for Newstart in March, and got rejected because I’d rescheduled the job provider appointment, even though I ultimately attended. I put my car repayments on hold, chased up old invoices, and signed a book publishing contract for a $1000 advance. Mum took out a community loan (choi hui) to pay our rent, after I could no longer afford it…

Amber quickly rolls onto her side, untangles herself from the blankets, and shuts off the alarm. 4.35am. Her hot breath billows into steam in front of her, cutting through the cold air of her bedroom. She’ll turn the heating on just before she leaves for work, so Sage doesn’t have to get dressed for school in the chill…

In the air, there is gossip but no life. Inside becomes outside; the exterior choked with interiority. Through an LCD window, the world, but at a greater remove. Regardless, distance is bridged by seamlessness. I witness myself glide from one window to the next, each spyhole a portal to a samey existence, mediated by imperialistic hegemony and aspirational desire… 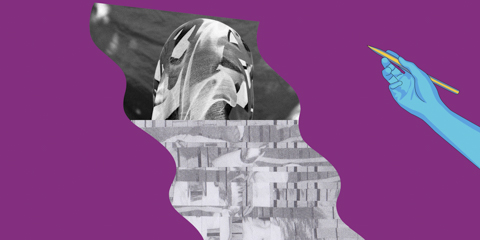 How Does a Journey Start?
H.Mur and Xen Nhà

At the end of March, I made a swift decision to leave New York City and fly home to be with my family in Melbourne. If it was not for you my dear friend, I would have froze on making such a decision. Before we even knew that we would be living together in New York City, we had taken a drive down Maribyrnong Road out west…