For many Melbournians, finding ways to shake up the exercise routine or step away from the screen during COVID is important. With our new precinct café Myrtle Wine Café opening this week, grab a Five Senses coffee and check out thirteen of our favourite public artworks while strolling the streets of Footscray.

Pasted on the Maribyrnong River side of the FCAC Warehouse building are two large-scale photographs very close to our hearts. Celebrating the wonderful local Aboriginal Taungurung leader and storyteller, and FCAC Elder-in-Residence, Uncle Larry Walsh is a series of black and white portraits simply titled Uncle Larry.

Created by renowned Wiradjuri artist Brook Andrew, alongside the local community, Marks I is one of the most instagrammed works on the FCAC precinct. Sitting at forty metres long and six metres tall, this piece represents the patterns carved into traditional Wiradjuri shields. According to Andrew, the mural ‘is a reminder of our strong links to  culture and how we can develop ways for our cultures to live in a contemporary society and still have strong meaning’. Find it here at FCAC.

Unveiled during the closing ceremony of the 2012 Maribyrnong Literary Festival, this enchanting artwork is comfortably hidden amongst the FCAC riverside greenery, near the Maribyrnong River. Made by West Footscray artist, sculptor and furniture maker Jos Van Hulsen, co-partner of quirky local small business Post Industrial Design, this is the perfect place to sip a coffee, read or just enjoy the view.

4. Eel Trap, Mitch Mahoney and Maree Clarke, 2020. Situated on the FCAC precinct near the Maribyrnong River.

Inspired by traditional Aboriginal eel traps, this piece by artists Mitch Mahoney (Boon Wurrung) and Maree Clarke (Mutti Mutti and Boon Wurrung/ Wemba Wemba) is situated along the pier nearest to the FCAC riverside lawn, submerged in the Maribyrnong River. At ten metres long and made from local river reeds and other biodegradable materials, this installation is an example of how Indigenous knowledge, science and art is integral to our fight towards a sustainable future.

5. Arch for reconciliation, Brian Paulusz, 1997. Situated on the FCAC precinct.

Located riverside at FCAC, this piece symbolises the ‘motion of Reconciliation’ and the apologies issued by governments for brutal past practices. The work itself was completed in 1997 and is made completely of basalt. 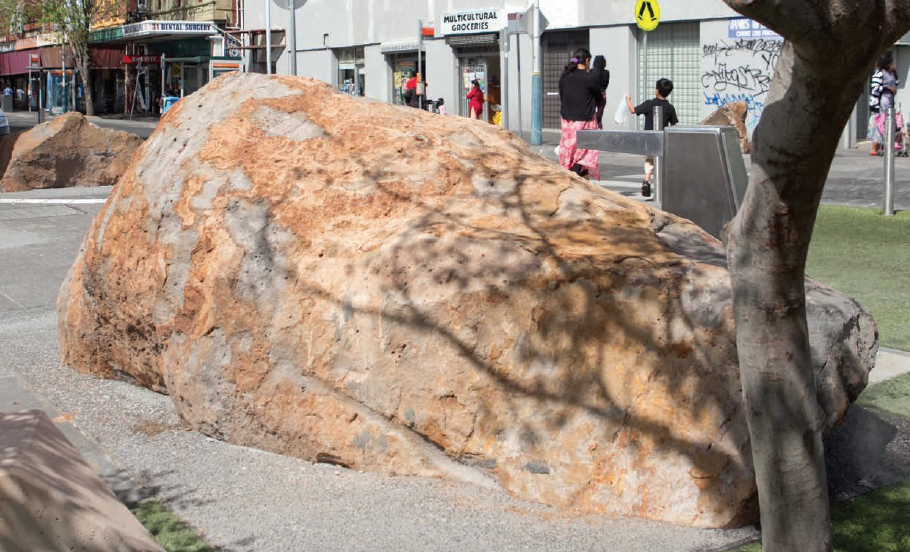 After its accidental removal in 2017, Australia’s first disability pride mural was remounted as part of the 2018 Melbourne Fringe Festival, led by Larissa MacFarlane with the support of Maribyrnong City Council. This powerful piece was created and installed by over fifty artists to publicly celebrate the broad diversity of experiences within disability culture. Further information about this installation can be found here on MacFarlane’s website. 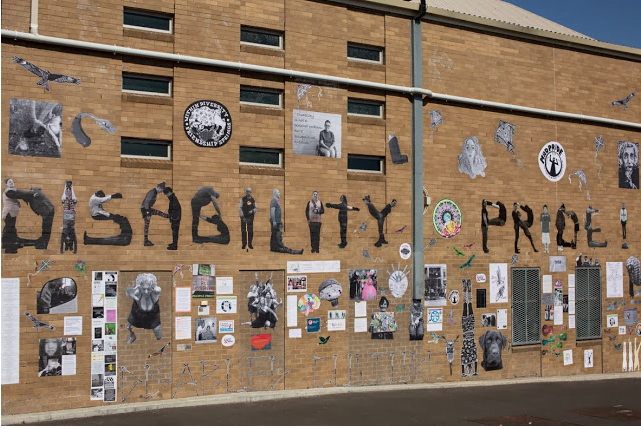 The magnificent Miss Citizen of the World stands four stories high at Victoria University’s Nicholson Campus in Footscray. It’s maker, the prolific Heesco, was the recipient of Footscray Art Prize‘s ‘Street Art’ category in the year of installation. The artist draws inspiration from his own Mongolian roots, adding a modern twists to this display of cultural tradition.

9. Dogs of the West, Justine McAllister, 2019. Installed at the corner of 174 Nicholson Street, Footscray.

You can’t reference Footscray Art Prize without mentioning the bold and playful piece, Dogs of the West. The 2019 street art recipient, Justine McAllister, stands tall beside her award winning mural pictured below. The artwork showcases portraits of dogs that frequently visit Martin Reserve Park in Footscray, where McAllister visits with her two pups regularly.

Submissions for Footscray Art Prize 2021 are now open! For you chance to share in $28,000 worth of prizes, enter online, today.

If you have seen a seemingly gravity-defying black and white floating figure somewhere on the side of a building in Melbourne, you can almost definitely thank Baby Guerilla. The Melbourne-based artist completed this piece, a commission by Maribyrnong City Council, on the side of Madden Square on Rose St in 2012. 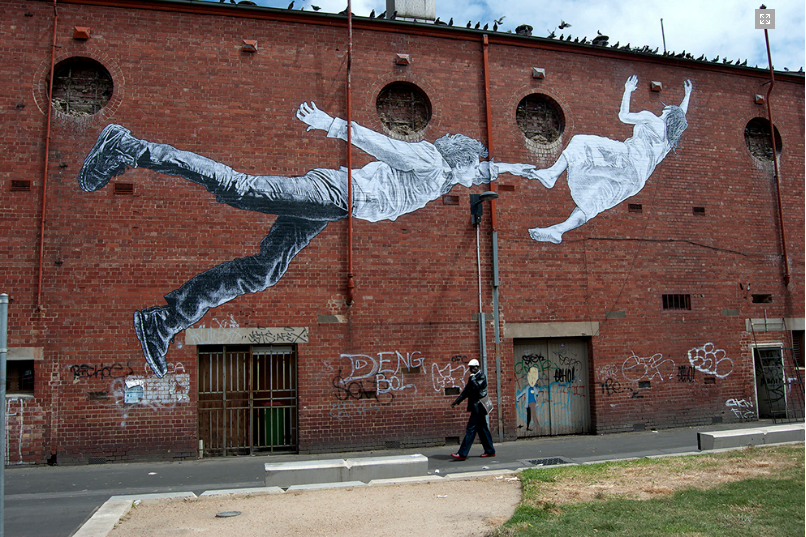 The idea of two people hugging might seem unfathomable in a pandemic, however this sculpture is a must-see. Reflecting his signature rough and large style, this piece by Bruce Armstrong stands tall on Vipon St in Footscray. A tree trunk carved into two intertwined figures, the base also provides a nice place to sit and enjoy the calm vibe of this rather unknown, quiet Footscray street. 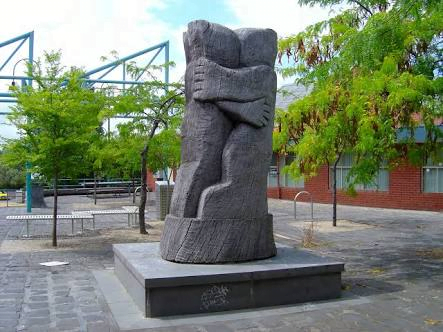 12. Franco Cozzo Mural, Heesco and others, 2015. Situated on Hopkins St on the side of Franco Cozzo’s iconic furniture store.

The name Franco Cozzo is synonymous with Footscray, and in 2015, the furniture king was immortalised by a large scale mural on the side of his store. Renowned for his unforgettable TV ads, Cozzo is a Footscray icon. The mural was painted by a group of street artists, including Mongolian artist Heesco, who also painted the 8th featured work on this list, Miss Citizen of the World, at Victoria University. In an interview with the Herald Sun, Heesco stated that the ‘local icon, painted with his arms outstretched, was welcoming people into Footscray’. 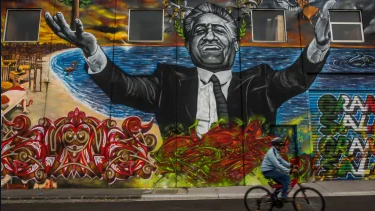 If you fancy a short drive, go check out this eight metre tall and twelve metre wide industrial sculpture made by Matthew Harding, commissioned by Maribyrnong City Council. Made from LEDs and thirty-two kilometres of stainless-steel rods and tubes, Matthew Harding felt inspired by the local area’s industrial history, using historical construction methods to create this eye-catching piece. Enjoy it on an evening stroll down Gordon St when its light show is most vivid. Find out more about Pipedreams on Harding’s website.

Zhang Xiaoan is a writer and…

About the Residency Presented in partnership with…