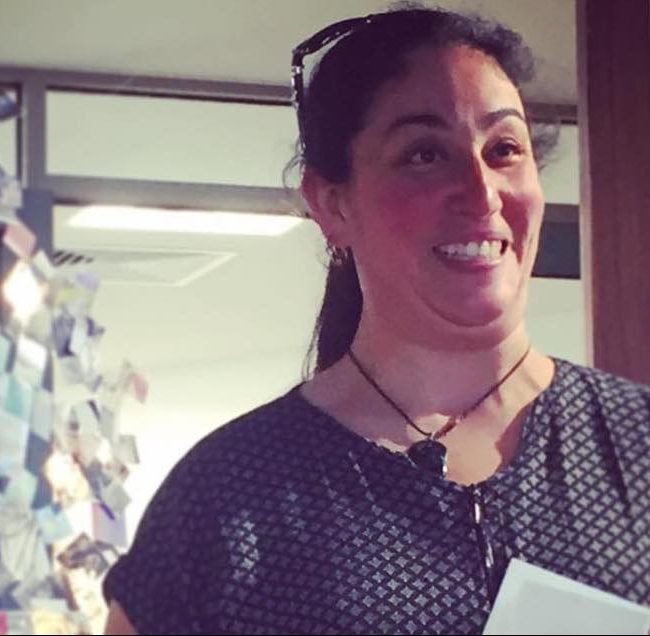 FCA celebrates the success of two people from ArtLife and our community who have been acknowledged with Maribyrnong Inclusive Recognition Awards (MIRA) – an annual award for leaders in the local community who are combating social exclusion through inclusive innovations across the art and community sectors.

Artist Teagan Connor was announced as the winner in the Arts category for Winter Labyrinth, presented at FCA in June 2016. What began as musings and sketches 3 years ago by Teagan, was revealed as a 14-metre, animated labyrinth, filling FCA amphitheatre with snake-like pathways that shimmered and disappeared as visitors walked its pathways towards the centre – a neon ice sculpture.

Teagan’s sense for the mythical past, reaches to her memories in childhood. Archetypal characters and the scenes in which they live are focal points for Connor’s work. Winter Labyrinth combined Teagan’s aesthetic for mythical and natural spaces, and the inspiration she found through the lens of a child’s imagination.

For 7 months Teagan and creative team developed the project which became one of the highlights of ArtLife artistic program. In an evening projection which saw over 200 participants who walked the labyrinth, meditated on its meaning and for one night, could ‘see like a child’. Teagan’s design was intuitively inclusive. Winter Labyrinth encouraged people of all ages to participate and find the ‘magic’. Teagan centred the experience of the audience in her work to make a large scale piece that was socially engaged and highly successful.

In Teagan’s artist statement, she describes:

‘I started drawing up labyrinths to see what they would look like. I was surprised when it was suggested to have it on a grand scale like this. And since it was planned for a couple days after the winter solstice, I thought I could try and make one that represents this time of year. The shape of the labyrinth is to reflect a snowflake, this is wintery. Also the best time to see this winter labyrinth is at night because it is cold. That is wintery as well. Other than being a cold night, we are obviously all in winter so the timing, weather and shape of this labyrinth reflect the season. Blue and white is the best way to think about and represent the labyrinth. These are the colours of winter.

I want for the Winter Labyrinth to have a mythical and magical feel to it. You can imagine that you are seeing it through a kid’s point of view. Everything is basically new and you can see magic in nearly everything around you. As a kid you want to believe anything is possible and sometimes you can imagine seeing things that no one else can see.

I am hoping that from the labyrinth, people could believe in the impossible and maybe see beyond what we can see.’

Pamela Debrincat is an active member of the FCA and our wider community. For many years, Pamela has been developing her leadership skills and her love of supporting others to achieve their personal best. Pamela is a long term volunteer in our Arts Learning program where she supports children to discover and learn new skills. In recent years, Pamela has been developing her skills in leadership and governance as a member on the Maribyrnong Disability Advisory Committee (DAC) and the leadership program with Women with Disabilities Victoria. An advocate for the rights of people who have a disability locally, Pamela chooses to spend a lot of her energy contributing to her community as a volunteer and in doing so, makes our community stronger, safer and more inclusive.

Pamela reflected on her volunteering experience, ‘my volunteering shows people that having a disability is enjoyable and fun, it doesn’t matter if you have a disability because everyone is always different and difference is cool. I am a woman who has a disability and I am able to talk, communicate, get around in the community and talk for others to help make it better. These volunteering experiences helps me to be a better leader. I would like to do more work in leadership to bring more of my encouragement, ideas and exploration to the community.’

FCA would like to congratulate Teagan and Pamela on their successes and as proud members of ArtLife and the FCA community.