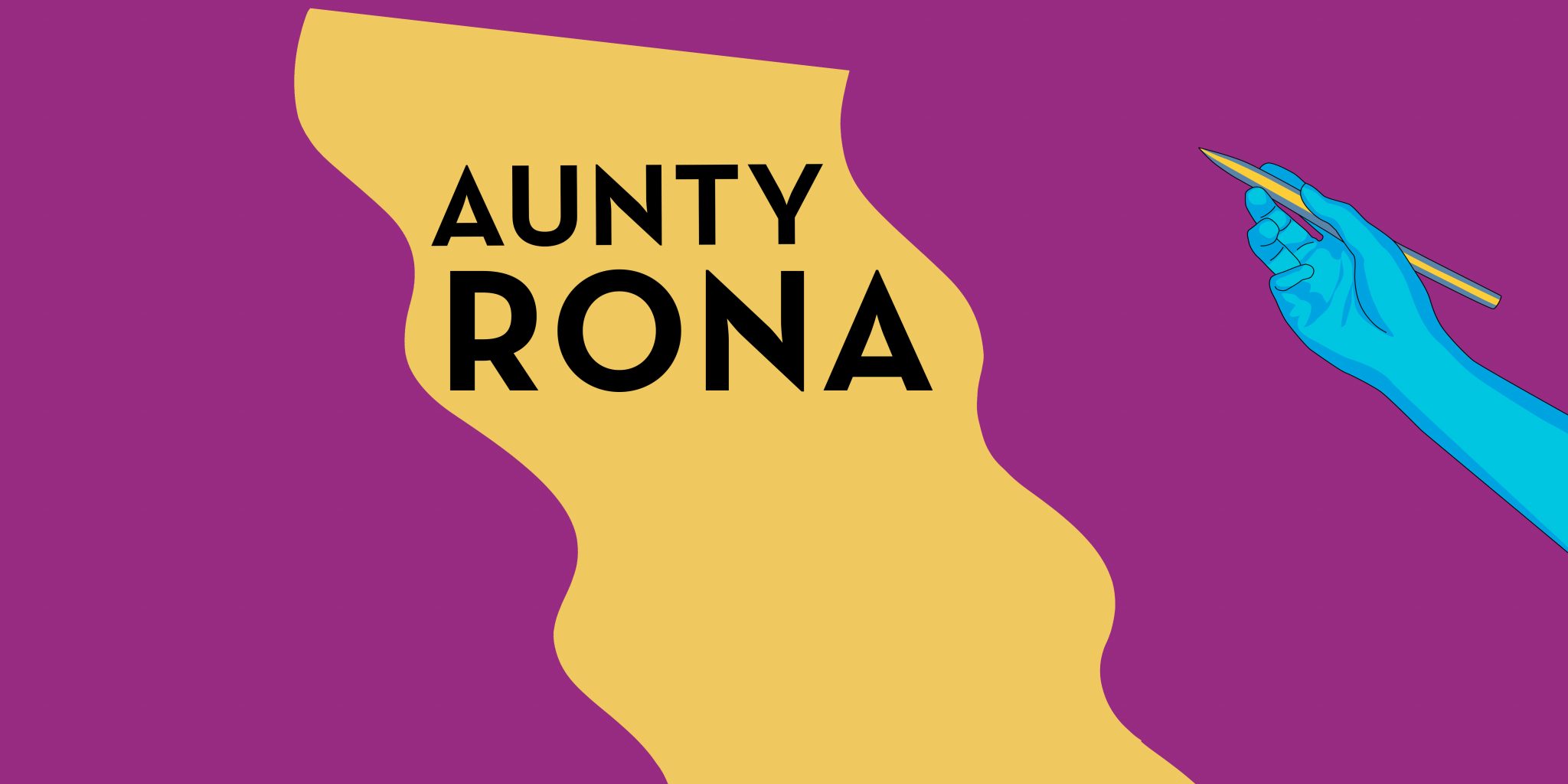 Writes is a collection of new work by writers from Melbourne’s
West and beyond, published online. Curated by Bigoa Chuol.

Aunty Rona is a racial activist, working in the Arts, who had all the hopes of joining the political ranks, grew up watching question time and reading Hansard to find herself disillusioned.

But most of all confused how this nation couldn’t see the catastrophe that Corona brought.

COVID-19 had leader after leader invade our TV screens to tell us about the unprecedented times ahead of us, spotlighting the unpredictability of this pandemic and preparing us for the economic ramifications to come. Putting in the groundwork so we can get laid off without a fuss, contracts pulled from underneath our feet and the acceptance of human rights breaches that will come with state of emergency governance. Never have I ever been more heart broken by the continued budget cuts to a public broadcaster than now. I watch as reputable journalists keep peddling media releases with minimal questions about how the bloody hell did we get here? The pandemic might have been unpredictable but the outcome was the road map of many terms of uninspired, if not negligent governance: from the left, to the right, the moderate and the in-betweeners.

As I sit here writing this in my overpriced rental surviving on Jobkeeper, gainfully employed since my teens, nor would I describe myself as particularly “lazy” or “indulgent”, none-the-less I find myself like the rest of the working poor up shit creek without a paddle.

The conversations of how we got here is one that you may not want to hear about, but these things have a tendency to cyclical and we should hold leaders we pay to account, so next time we are not caught exposed.

We have Canberra to thank for unsustainable policies – going on and on about some damn surplus, that so little of us see the benefit of. Tell my friends in HR that have been going from one 4 week contract to the next 3 months contract for 2 years. And the casual bar tenders, working 38 hours a week for past year with no sick or annual leave. How about the graphic designer getting paid per flyer? My Uber driver cousin working 10 hours and getting paid per ride and so on.

Contractors have to re-apply for the same job on a month-to-month basis, even though the role at times is available and required indefinitely. Then there are the labour hire companies which most large manufacturing plants use. Instead of hiring employees on a steady basis, they request employees to be made available within hours. Let’s just say the UberEats of staffing and you can see where that goes wrong. Again, insecure work with no safety nets.

These organisations are the same ones that are our MPs provide subsidies for infrastructure building in exchange for enabling the government to come up with snazzy catch phrases like “JOBS, JOBS, JOBS”. Why should you care? I mean you get flexibility, casual loading and so on. An insecure workforce is a disempowered workforce. What happens when you fall ill or you want to speak up on any breaches? Well, don’t let the door hit you on the way out.

This power imbalance is made even greater by the fact that it is hard to find a job. Of course, we are talking pre-rona, so we expect the situation to get worse. Automation technology developments mean there are less jobs than people looking for jobs. This is a fact that governments don’t want to get in the way of a good ol’ “dole bludger” headline. Did you really think self-checkouts are here for your convenience? They help companies reduce their overheads, also known as jobs. The avocado you stole last week and the green chilli you put in as beans still costs supermarkets less than hiring a person to check out your groceries. We don’t have enough jobs for Australians but we still welcome 150, 000 a year on working holiday. To all the Pauline’s out there no need to worry, you won’t be “swamped by Asians”, but rather good ol’ West Europeans. Largest cohort are from the UK according to 2019 Home Affairs reports. This is why some forward thinking governments have been talking about stipend wages. Not to worry, “fair dinkum” federal government will continue to govern as though we are not moving towards post-industrial economy. What’s more Australian than absolute denial? Maybe the erasure of Blak history.

Despite knowing there is a jobs gap for all that are seeking employment, government continues to asks people on benefits to show they are looking for work. In return, they run around like headless chooks, whilst government hires administrators to look over them. Numbers haven’t added up for a while, but politicians keep repeating jobs like it’s a Hail Mary manifestation. We need to ask for a different strategy from our leaders. It has been difficult as the narrative about unemployment and jobs has not been based on data but rather politics about which group of workers (class of society) it affects. As was seen when jobseeker increased so quickly, when COVID unemployment began to affect the traditional middle class.

Than down the list are pieceworkers. They get paid not on the hours they work but the tasks they complete. This is the life of the delivery drivers and taxi like services. The worker wears all the cost of business, using their own resources to facilitate an exceptional profit margin for the company without any obligation to pay employees a livable wage, nor significantly contribute to the taxable base of the country. We have shifted the risk profile of entrepreneurship to working person with all the potential benefits worn by the business. Therefore, the working masses are only ever one jolt away from economic catastrophe.

Don’t you worry Canberra hasn’t only been asleep on Industrial Relations but the entire economy. The gap between the “haves” and “have not” has also been widening. Wage increases have been relatively slower compared to cost of living. Although discretionary expenditure like electronics have been falling, essential expenses like rent, schooling, utilities have not. So you can afford that iPhone but your rent breaks your bank.

Economist have been using average house prices relative to average wages to show this gap to uninterested masses. Maybe this why STEM without Humanities and the Arts can be futile, maybe we shouldn’t increase those HECS fees for the Arts (that’s a side agenda I had to put in). Let me see if I can make the numbers make sense in ways the artsy fartsy like myself, can care about. The average house price in Victoria is now 8 times the average wages compared to 4 times in 1976.

Who cares about buying a house right? We are committed to collecting experiences, not acreage. We all love end of lease bond cleaning, not hammering in a nail, at times passive aggressive house mates and being able to touch my oven at the same time as watching TV. We should worry about this gap not because we have an interest in buying a home but as a good indicator of potential housing stress and financial strain for the average Victorian. You should care because it will be harder for the average person to pay for basic necessities – like rent and utility bills. But again, Canberra has been asleep at the wheel working out which fool ought to lead which barn.

The economy cannot, should not, be independent from the people it serves. It is the job of the people we elect to ensure the “free market” is working for us all, by curating the necessary legislation.

You and I are not fault free in this either. Trying to spend our way to happiness living above our means and enjoying after pay for that extra thing we absolutely need. Australia had the world’s second largest personal debt at end of 2019. So what are we spending it on? Majority of it went on the holiday we can’t afford, the wedding we should’ve downsized or the car above our tax bracket. ‘Only 12% of personal loans are used for unplanned occurrences’.

I worry that we have become a nation that has been accustomed to bad administration and electing pen pushers rather than leaders.

We elect a leadership team (parliament), supported by the best minds, one hopes (senior public servants) and funded (through taxes) to see around the corner and lead a nation in a manner that makes sense. Our leadership seems intent on using idiom of “she’ll be right” for most of this nations colonial history.

Always was, always is Aboriginal Land!