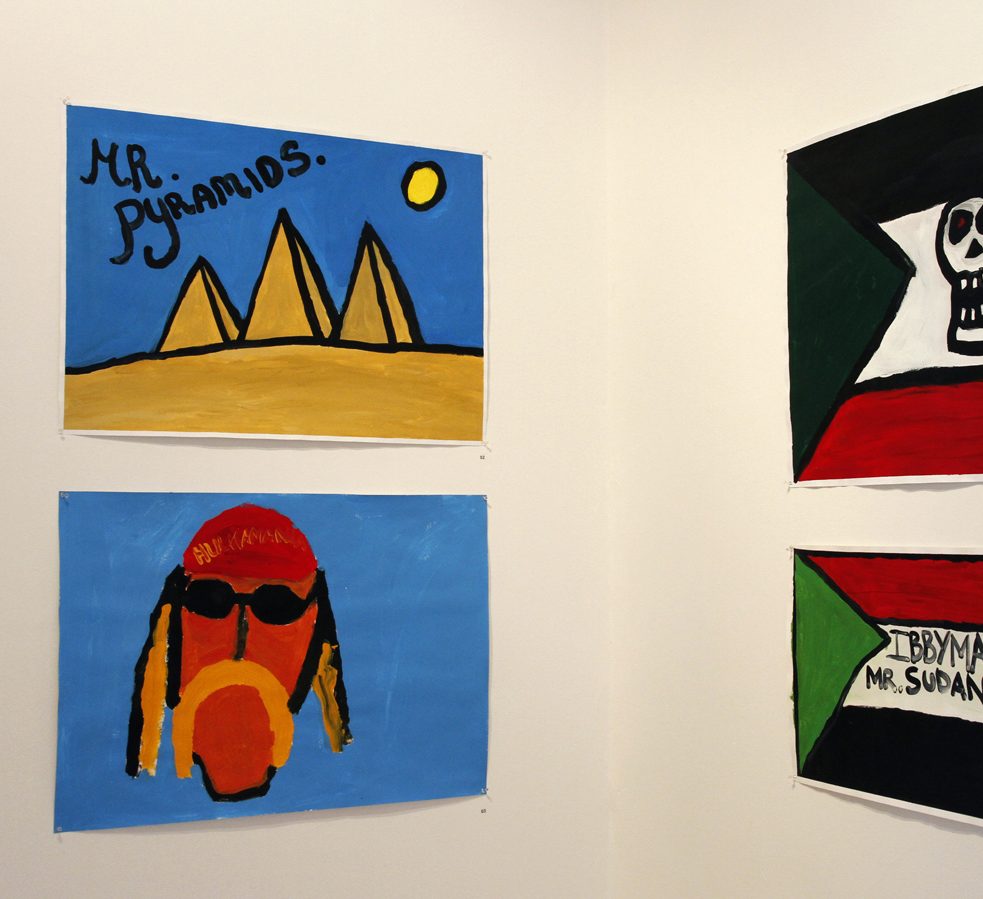 IBBYMAN is a visual arts exhibition by ArtLife artist Ibrahim Ibrahim ‘Ibby’. In the world of IBBYMAN, there are more supervillains than superheroes. Dark, witty and powerful, Ibby’s art world is filled with wrestling, fast cars, explosions and electronic music.

Ibby, who arrived in Australia from Sudan when he was 10 years old, has been working with ArtLife at Footscray Community Arts Centre for 5 years.Through the ArtLife program, Ibby was introduced to a range of mediums. ‘For the past 4 years, ArtLife visual artists has been represented in the Gabriel Gallery, all presenting their own solo shows,’ says Nikki Zerella, creative producer of ArtLife program, ‘this is when we started to see Ibby’s own unique perspective.’

There was an air of excitement in the studio. While other ArtLife artists were making art and chatting to each other, Ibby was quietly working on a new, large-scale painting. I sat down with Ibby to discuss his world of powers.

Ibby was relaxed and greeted me with the biggest smile. With the assistance of Jamie and Alister, both ArtLife tutors, we started the interview in writing.
(Please note the interview was conducted without an Auslan translator. Ibby responded to questions in writing).

Ibby was inspired by Iron Man (and Tony Stark), Godzilla, (real) ghosts and all the terrible things done by villains. ‘He is all about the villain. Heroes are boring,’ Jamie described Ibby’s work while the artist was listing all the villains whom he admired. ‘My favourite supervillains and superheroes: DeadPool, Spiderman, Captain America, Hulk, Batman, The Flash…’ he wrote.

At the entrance of the exhibition, hangs Stone Cold Steve Austin, his largest painting in the show. Game Over and ‘IBBYMAN’ written on the painting, a strong superhero figure stands in the centre, holding and protecting earth from alien attacks. There is a number of portraits of superheroes in the show, as well as Sudanese flags and skulls with headphones. IBBYMAN is the strongest hero in his narratives.

Being deaf does not stop Ibby from loving electronic music. When asked about the headphones in his paintings, he wrote, ‘Electro House … All people in our country, mixed boy and girl.’ In the world of IBBYMAN, electro house music brings everyone together with shared adventures. Music is very present in his work, so is wrestling.

‘Wrestle is painting,’ Ibby wrote, ‘you can see me.’ Each punch is lyrical.

In the middle of the gallery, a screen plays ‘The Perfect’, a looped video of Ibby going through pages of ‘perfects’. Among the long list of ‘perfects’, the artist said his favourites were ‘The Perfect Blood’, ‘The Perfect Crying’, ‘The Perfect Punch’ and ‘The Perfect Sexy’. Describing each with utter excitement, Ibby expressed that he would like to know all the perfect things, and understand what they could possibly mean.