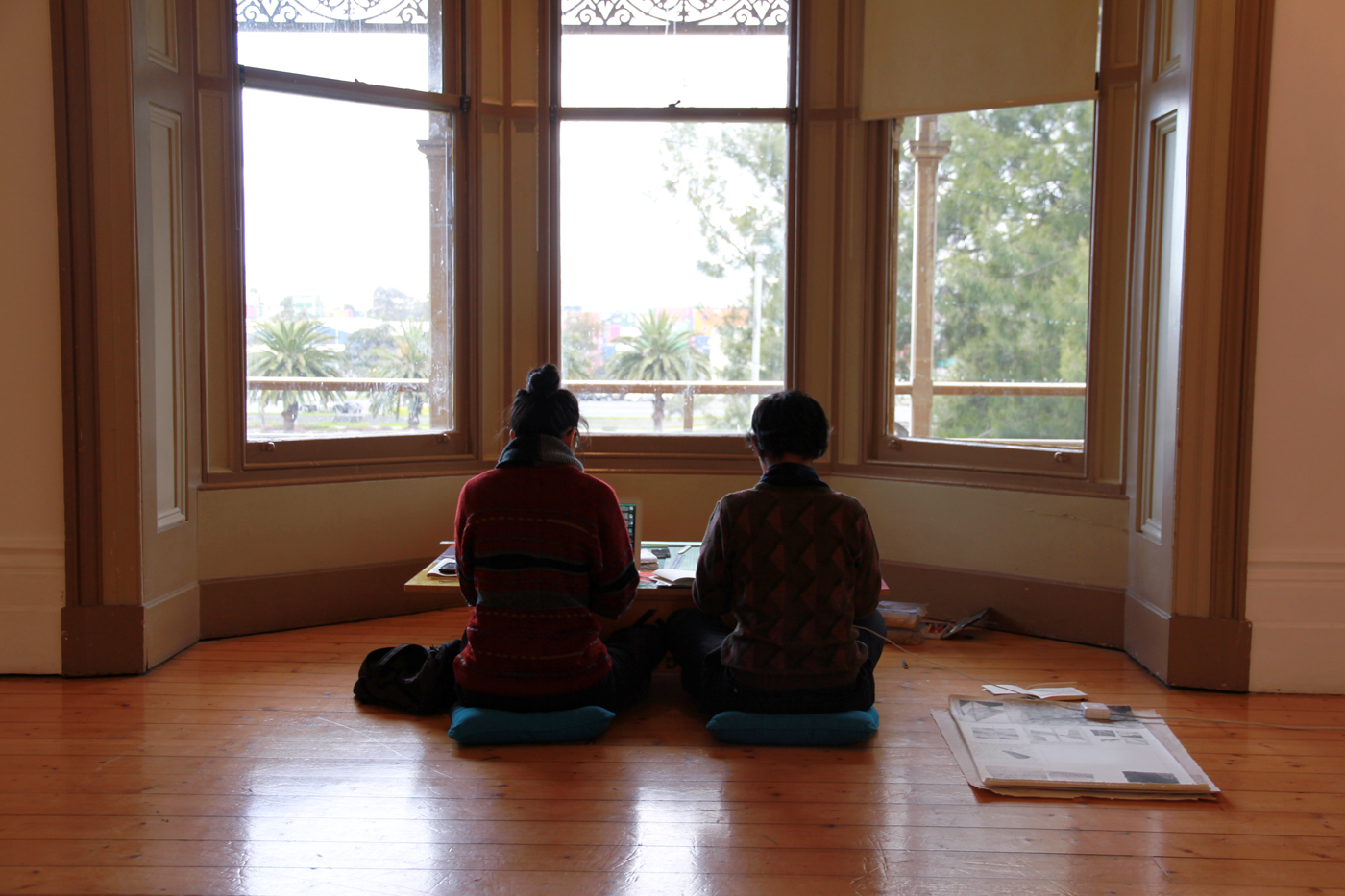 Visual artists Cheralyn Lim and Jaime Powell describe She Drives the Car as an exhibition that presents a yin yang balance of their collaborative work as well as their relationship. Both work with paper however in very different ways, the residency exhibition is part of an ongoing dialogue between their practices.

We spoke to the duo about the exhibition and their collaboration.

Can you describe your independent practices?

Cheralyn: I think my practice is a process of elimination. It’s a response to everything I’ve done before. In primary school in Singapore, art class meant tracing pictures. My parents also started sending me to after school art classes, but that didn’t last very long. I have a vivid memory of being told off because I used the black crayon to outline my drawing. So between being taught that ‘art is tracing’ at school and then getting in trouble for tracing after school, I gave up on working with representation altogether.

In high school I wanted to imbue everything with ‘meaning’, inserting secret symbols into everything I made. I can see this was an essential stage in my practice. But when I think back to what I made then, just like a teenage haircut, I cringe, and so I work purely visually now. In art school I started working more freely, a reflection of my new found independence and a quiet kind of rebellion.

Right now, I haven’t been happier making art because I am exceptionally free. What I have now is an assemblage based practice. Installation and collage make sense to me. I’ve said over and over again that I just can’t draw or paint on a clean sheet of paper, nor sculpt from a block of clay. The directness of creating a form or image by my skill alone scares me, which is why I think the unpredictability of paper- making suits me. I tear, pulp, labour over a tub to chance upon elements that I can then arrange. It’s messy, tactile and playful in a way that I’m not. I think this is such a fascinating contrast to Jaime’s lithography practice, which is very much ‘fine’ art because it requires training, discipline and machinery.

Jaime: I am interested in the mark, the individual trace that we create by movement. My mark-making comes mainly from an interest in language and envy of fluent drawing skills. Growing up in India we heard different languages spoken around us and saw different scripts on shop signs, movie hoardings, newspapers, political banners. I could not read the scripts so my enjoyment was purely visual. The graffiti carved into a wall or the embroidery on a flag at a Mosque was very exciting to me. I viewed them romantically, evocative of a world that ironically, I was both in the middle of and outside of. At the Victorian College of the Arts, I met people with very advanced drawing skills. I realised that I was unconsciously trying to compete with them and both the competition and my perceived incompetence frustrated me. I realised that I could either train to draw for a lifetime or draw on the signs and symbols that I remembered so vividly.

My work has come to involve into a presentation of the record of these marks. I use lithography as a tool to record these unique marks including the clumsy twitches and jerks that are part of the drawing process. It allows me to make something intangible tangible. In the layering of these symbols and signs over and over, their original meaning is distorted and a new meaning is created through the excess of visual information.

How did you become collaborators?

Cheralyn: We’d known each other for over three years before working together. In 2012, I was due to have my first post-art school exhibition at BUS Projects, and when my collaborator pulled out, Jaime offered to help me. Making that exhibition took us a bit over a month, and it was such an intense experience. It was an ice breaker, and it kind of laid bare our flaws and strengths, because being friends or being with someone is completely different from working with them. It worked out really well. That body of work was a turning point for my practice because it introduced me to new methods. I also think the project gave Jaime a sense of how valuable a printmaker’s skill set is outside her own practice.

Jaime: We realised we spoke about our own work in very similar ways, but our work and the ways we worked were very different. It was a different direction to start exploring and developing our own practices and aiming to be more articulate in our work and thoughts. It’s great to have a continual discussion with someone who is interested in your work and is invested in you and your practice.

Please tell us a little bit about ‘She Drives the Car’. Is there a goal for this collaboration?

Jaime: When you go to art school or experience a major change in your life, your work adjusts to reflect that. New ideas, new possibilities, new haircuts. We have been working with and around each other for five years now and this has meant that we have become increasingly sympathetic to each other’s practices. I didn’t realise how much my own work has been influenced by Cheralyn’s until I saw the show installed. Had we not known each other we still would have made work but it would not have been this work. Now that we can see ‘She Drives the Car’, we are happy to have a record of this relationship, which is a reflection of the last five years and serves as a marker from which to measure our future progress.

Cheralyn: ‘She Drives the Car’ is an opportunity to showcase our most recent work side by side and it’s an opportunity for others to see how we operate. While we haven’t collaborated with each other explicitly, it’s undeniable that we support and influence one another in our practices. The title ‘She Drives the Car’ is a reference to the yin yang balance we have in our personal and working relationships. As individuals, our skill sets are quite different and so are our personalities. But somehow it works. I think the exhibition makes plain this symbiosis. You can tell we are each others’ critics and taste makers.

In terms of our in studio time, we have a few projects we’re working on at the moment, individual and collaborative. We are each editioning a series of books for the upcoming Volume Art Book Fair in September, and this is one of the things we’ll be working on in the space. Apart from the works on the walls, we hope to use the space as a place to test new work.

We are making public an otherwise very private experience and putting ourselves on display — placing our studio practice in the open air.

She Drives the Car is a residency exhibition by visual artists and collaborators Cheralyn Lim and Jaime Powell, currently showing at our Gabriel Gallery until 27 September, 2015.