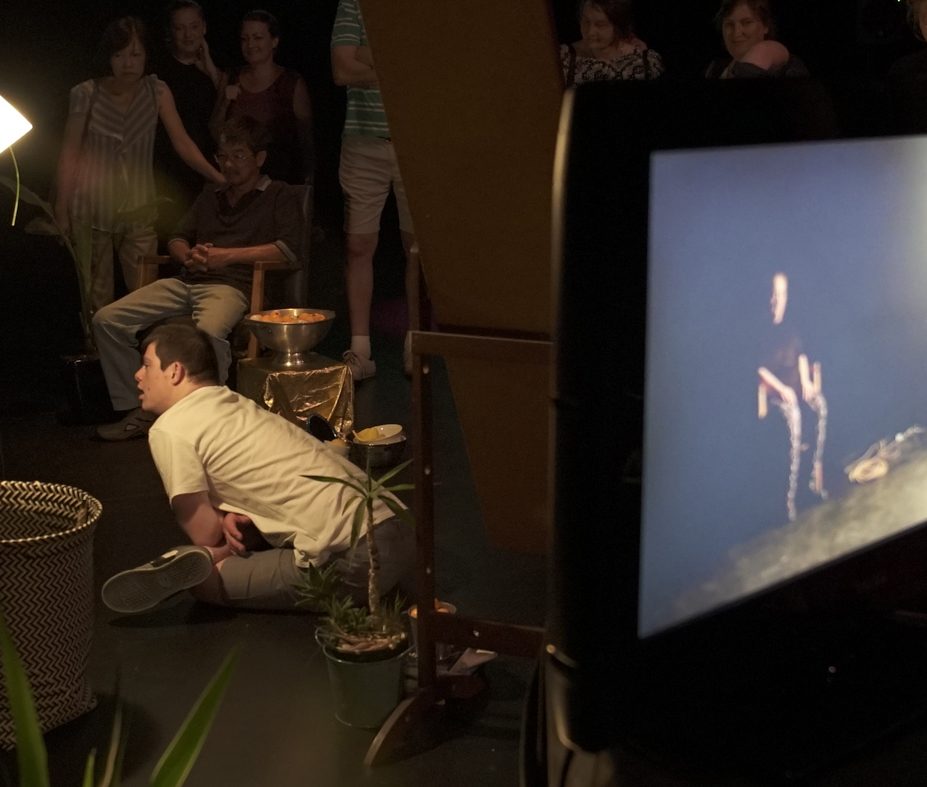 Culture is imprinted on our bodies. Bodies speak of the spaces, clothing, they have inhabited and the limitations they have been confined by. Bodies tell stories the movements that they have seen and valued – the wave of a friend in the distance, the gesture of the pop star, and of movements they have felt – the heartbeat and the inhale. Bodies narrate environmental strength and frailty. Bodies even describe the speech or language they use or do not use. Traces remain in bodies of the stories they have been told, and the character that has become a talisman.  Bodies then are vessels for meaning.

Body Move Space at Footscray Community Arts Centre is an installation built around a collection of films that explore the language of the body in relation to space and place. It explores the way our bodies author our spaces, prescribing and erasing chaos, creating eddies and empty spaces, at once pushing places around and being manipulated by places.

The installation invites our bodies as spectators to navigate a journey through a space and media, and attend to the secret, subtle gestures, to vernacular movements, and to abstract gestures. The installation includes seven films which are curated in such a way that we have an experience of multiple screens at once: an experience for me of the multiplicity of meanings the body creates.

Despite enjoying the experience of multiplicity, I choose to focus on Blueprint first: Blueprint is a solo, duo and trio of ritualised gestures, measuring and carving space. The camera captures the artists closely framed in blue light. The performers create an imaginary plan for a future place from their bodies. Perhaps they are craving release from the confines of this frame. A stark white line dissects the space around Blueprint. Extending out from the screen, this geometric design articulates boundaries of ground between the viewer and the work. Or creates lines of perspective through which to view the work.

The Conversation is a series of works displayed on IPad’s featuring duets between people and landscapes.  I spend some time with a strangely beautiful duet that features the hands of two performers, against a background of pink and green, the hands repeat a dance of unfurling and enclosing themselves, seek each other out and then rest. The works in The Conversation are choreographies in response to the textures of bodies and external spaces.

In Object Score 1 and 2 performers activate domestic realms, making sacred the banality of the objects we live with.  With their curious gaze and exploration, they activate lamps and paper, ping pong balls and mirrors, plates and saucepans, they create obscure and unusual relationships between bodies and objects.  Around the two screens on which Object Score 1 and 2 are featured is an index to home, an accumulation of the debris of a living room, each object a metonym for home.  The works in Object Score 1 and 2 are series of ritualised movements in response to the textures of objects and the intimacy of home.

In Bedroom Dance a series of solos unfold under an oval spotlight.  These performers might be  all alone in their bedrooms cutting up the rug.  The performers are dancing with spaces of meaning imagined (the dance floor or the dancing with the stars set) and real (the obstacles of their bedroom), they’re dancing with themselves, they’re dancing with their images of what dance can be. Steven, ‘You can call me Stevo’ has a couple of movement languages operating in his solo, but most predominantly he has digested a popular style of dance – popping and locking – and performs an idiosyncratic and lyrical version of this in his Bedroom Dance solo.

The screen that features Bedroom Dance is high up and doubled below the screen is the lighting state of the oval spotlight featured in the film.  This brings into focus the practices that produced the films. The audience can step into the light as they create a path through the installation.  Interestingly we avoid this spotlighted area.  Perhaps feeling uncomfortable with the realm of these performers who have a practice and therefore a legitimacy under the light.   These works are pervading with the practice that the performers engage with. The enquiries into body, form, gesture and rhythm and space that are present in the artists’ work reveal a longevity of and sustained attention to and on practice.

The installation creates frames around the practices of movement we habitually have and those movements we more consciously choose to engage with. The collection of films is a catalogue of practices and bodies. Through their work this collective are moving space around, moving bodies around and creating new meanings about bodies, movement, and space. As I leave the work, I’m more attentive to my body, and the space that I am moving through. I’m becoming Body Move Space.

Tamara Searle works as a director, dramaturg, and movement consultant in theatre. She is currently Artistic Associate with Back to Back Theatre where she curates a program of community engagement and access, and assists the development of new work. She has recently been exploring themes of identity and history, and the ethics of community and ecology in her work.