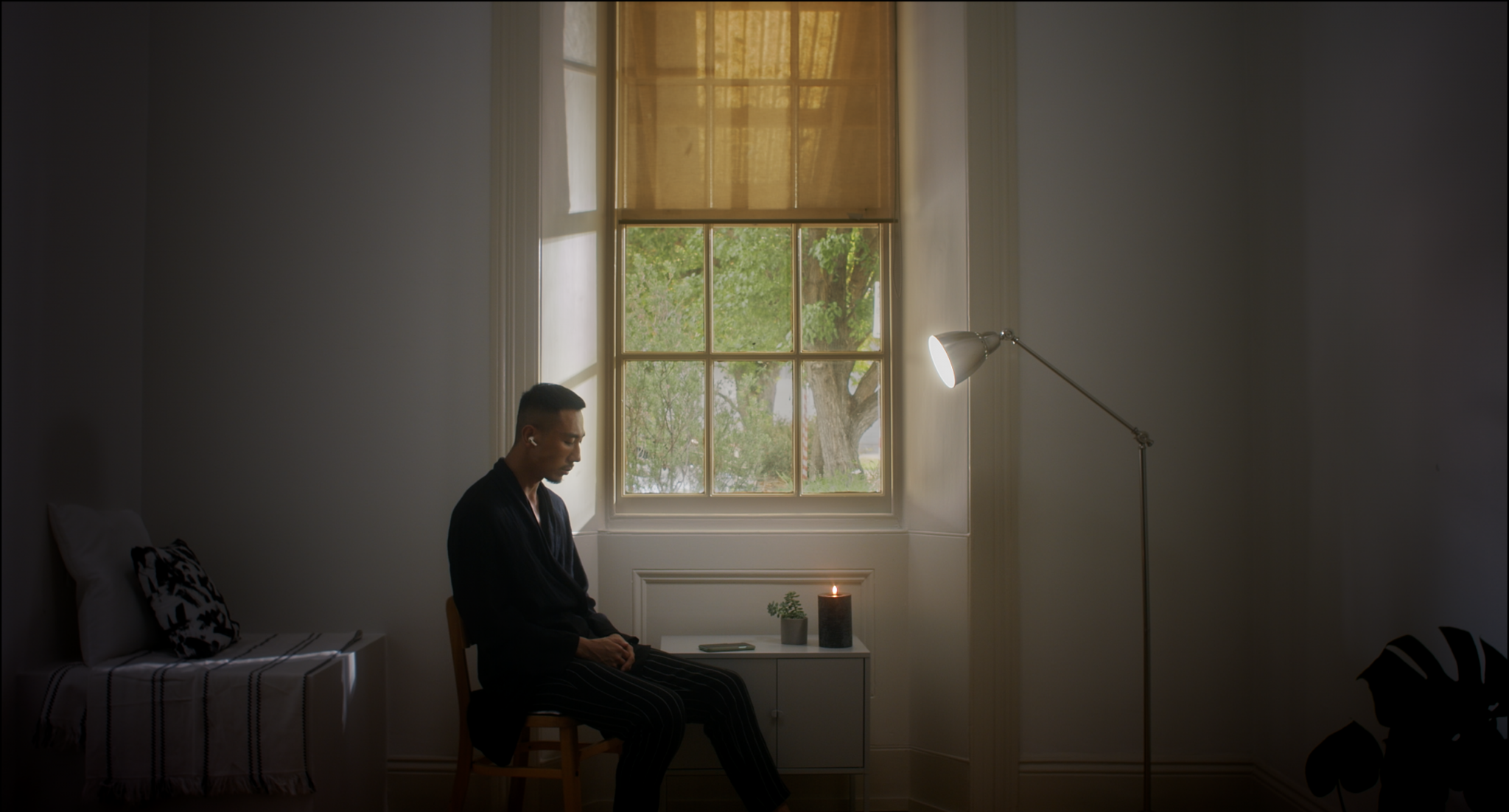 Zhang Xiaoan is a writer and director hailing from Xinjiang, China, currently based in Melbourne. He’s one of over twenty independent artists and collectives to be offered space to create in the recently refurbished Henderson House studios as part of our new residency program, RESIDENCE.

Through RESIDENCE, Xiaoan shot and directed a short film called Best Wishes, exploring the experiences of the Chinese LGBTQIA+ community in the context of traditional culture.

In this discussion, Xiaoan details his artistic journey from Xinjiang to Footscray.

Footscray Community Arts: Tell us about yourself.

Zhang Xiaoan: My name is Zhang Xiaoan. I’m a filmmaker from Xinjiang, which is in the West of China.

I loved watching films growing up, but it was hard for me to imagine a career in filmmaking. No one in my family works in the field of film. My hometown is quite a small city and there wasn’t many opportunities for me to learn about filmmaking.

When I was older I decided to take the courage and choose film as a career to pursue in my life. I started to make short films when I was doing my Master’s Degree in the U.S. in 2013, and then when I went back to Beijing, I mainly worked on the producing side. When I came to Australia in 2017, I decided to continue with and develop skills in writing and directing.

Footscray Community Arts: What inspires the stories you tell through film?

Zhang Xiaoan: Ridley Scott is my favourite director – the story he chooses to tell always have a theme on the fundamental aspects of human nature and his production design is a joy to watch. If I want to watch a film in a cinema, it would be a Ridley Scott film. I love how he balances art and commercial elements of making a film – that inspires me, I want to be like him.

I think I can learn something from every director. I also love Alfonso Cuaron and Steve McQueen – especially how they use long shots to tell a story. Or Spike Jonze and the way he uses music to guide emotions.

The inspiration behind my first few short films however was the horror genre. I love horror films. It is probably because of my curiosity about what there could be after death and exploring the darkest parts of the human soul. I particularly like Japanese horror films when I was a teenager, such as Takashi Shimizu’s Ju-On, which was re-made into the Hollywood film The Grudge.

Footscray Community Arts: What interests you about horror as a genre?

Zhang Xiaoan: Including me, a lot of Chinese people think that Japanese horror films are scarier than Western horror films – probably because we have a similar cultural background and it’s closer to our day to day lives. A lot of these films are based on Japanese urban legends and you can sense their unique identities. As an island country that often suffer from tsunami, water usually has a bad symbolism in Japanese horror films. The female ghosts are seen by many researchers as a defiance against a patriarchal society. Also an apparent example could be Godzilla and the reflection on nuclear weapons. It is very fascinating to me and I always enjoyed studying J-Horror.

It made me wonder why China doesn’t have horror films like that as there are so many urban legends that can be made into great films. Unfortunately, due to the censorship laws, it makes it hard and a risky business. A lot of the Chinese horror films aren’t that great as there is a limit to what can be made with censorship, so a lot of filmmakers avoid this genre and don’t take it seriously. That was the research direction in my master’s research project, the possibilities of Chinese horror films and how to create this genre under current censorship laws.

Footscray Community Arts: You’ve studied in New York. What was that like?

Zhang Xiaoan: My wife and I studied in NY state in Buffalo, near the border to Canada. Only 2 hours’ drive to Toronto. She was in Visual Arts and I was in Film and Media. I help her with her art installations and she helps me with my films. She actually played a ghost in my end of year film! We actually met in Buffalo through an international students mailing list as we wanted to get on a family phone plan because it’s cheaper! We realised later that we also studied on the same floor.

I went to NYC in the first holiday I had. I was really excited. To me, being in NY city is like learning filmmaking, you imagine what it’s like before you start but when you are really there in reality, it can be quite challenging. NYC has its amazing parts and also the parts you don’t enjoy, like the subway. However, there are moments, maybe a song track or a view, they could suddenly give you this realization – “Wow, I am in NYC.” Just like when you are struggling on editing or sound mixing, and then something could give you this realization, or affect. “Wow, I am making a film.”

One of the professors in SUNY Buffalo said “You have to express something”. That is the most valuable thing I learnt from my time in NY. Before I just thought it was about making a good story, but now I think more about why I am making this film, what I want to express, to articulate, and then I think about how to make it. This is not just about filmmakers but important for all artists I think. What do we want to express through our arts.

There is a phenomenon in China that a lot of gay people marry women and in a lot of cases the woman doesn’t know her husband is gay. It creates a lot of tragedies. I have some gay and lesbian friends in China, and they all say it’s definitely not fair to the partner who they are marrying.

If you are a LGBTQIA+ in China, physically you rarely encounter violence. For example, If you are on the streets and have looks that may be considered peculiar to others, people rarely confront you on the street – that’s a cultural aspect of Chinese people. The challenge is mental. There’s a lot of family responsibility and traditional culture – you have to have children so that the bloodline and family name continues, which is an important part of Filial Piety, a key trait in traditional Chinese culture. This is why people often hide their sexuality which also impacts on the people who they end up marrying.

Class also plays a factor. If you are middle class and have money and identify as LGBTQIA+, you can afford to live abroad to remove yourself from the situation.

After talking to a friend and having some researches, I decided it’s a story that I would like to tell.

Zhang Xiaoan: I’m developing scripts for two web series and two feature film scripts. It’s really important to have the script as perfect as it can be before you start spending money on production. I am looking at opportunities in China and Australia to develop these projects.

I have a horror web series I have been developing in 2020, with each episode focusing on a different person, a migrant, an international student or a tourist in Australia. The reason I cast Chinese or Chinese-Australian characters is that Chinese audiences can relate to it and as it’s better for distribution to China. I was working with a Chinese producer on it, but unfortunately it was lay up at this moment for political reasons.

I am also working on a romantic fantasy web series at the moment that I’ll eventually pitch to Screen Australia for funding.

Learn more about Zhang Xiaoan by visiting his website, or connect with him on socials.