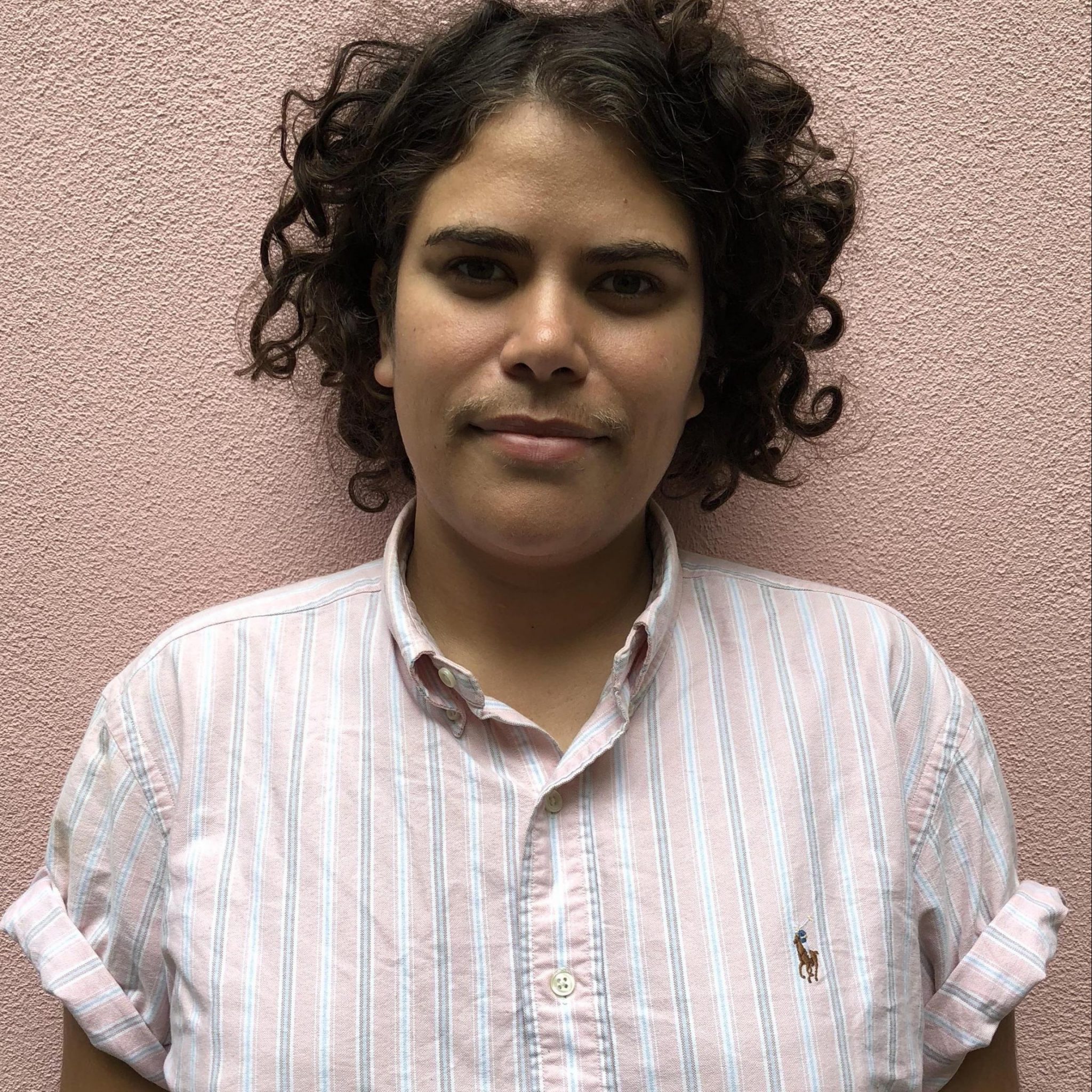 A series of related but tangential thoughts by Nayuka Gorrie

Writes is a collection of new work by writers from Melbourne’s
West and beyond, published online. Curated by Bigoa Chuol.

Nayuka Gorrie is a Gunai, Gunditjmara, Wiradjuri and Yorta Yorta writer. Nayuka’s work spans social commentary and features in publications such as The Saturday Paper, the Guardian, The Lifted Brow and NITV, and television writing for Black Comedy and Get Krack!n. They have featured in the Queerstories, Going Postal: More than Yes or No and the Growing Up Queer in Australia anthology. They are a recipient of the Wheeler Centre’s Next Chapter scheme. Nayuka is writing a book of essays exploring contemporary colonialism.

A series of related but tangential thoughts

I wanted to write a cohesive essay about the times we are in that would be shared around with captions like, “Ugh, this!” and “very that!” Instead I have lost the ability to be cohesive. I’m not sure if it’s my particular conditions or the general nature of the world. So much is happening at any one point pulling my brain in each direction simultaneously. My thoughts have been reduced to tweet sized grabs that jump from one topic to the next like a chirping wren in the shrubs.

At the start of all this people were sharing texts across various platforms like, you don’t have to be productive right now. We’re in the middle of a global pandemic and it’s ok to not be ok. Or, hope you’re keeping safe and well during these unprecedented times! They are only unprecedented in Australia if you have a short-term memory. Most of my great-grandmother’s siblings died from tuberculosis, a contagious respiratory illness. They lived on Lake Tyers Mission in Gippsland. I think about what that plague would have been like? How did they find comfort? No Netflix, UberEats, alcohol delivery, grocery delivery, houseplant delivery or Spotify.

Waiting on a hero part i

I’ve been isolating since March 19. I had two children last November. They came three months early. We spent three months in the Neonatal Intensive Care Unit watching our twins grow. One came home in late February and the other on March 19. This succinct paragraph inadequately recalls the experience but it is enough to know that I am not the same person and I keep the residual trauma stored away in my brain’s filing system.

I wanted to write a cohesive essay about the times we are in that would be shared around with captions like, “Ugh, this!” and “very that!” Instead I have lost the ability to be cohesive. I’m not sure if it’s my particular conditions or the general nature of the world. So much is happening at any one point pulling my brain in each direction simultaneously. My thoughts have been reduced to tweet sized grabs that jump from one topic to the next like a chirping wren in the shrubs.

During those three months of waiting and watching the virus started as a distant curiosity I scrolled past. I would tut-tut, that’s terrible and keep getting on with my day. It manifested initially as racism – a nurse mentioning a video (which turned out to be from 2016 and unrelated) of a wet market in China. A few weeks later as the internet background noise moved closer to the foreground, another nurse came back from a cruise. She bragged about not worrying about the virus. Every time she spoke to a new person throughout her eight hour shift, I wasn’t worried about coronavirus. Fixing my baby’s nasal feeding tube, her hand fiddling around the entry to my baby’s respiratory system, I wasn’t worried about coronavirus.

It seems so long ago to remember properly but Scott Morrison was slow to act in response to coronavirus. When he did discuss it, he was flippant, when asked if he was going to watch the NRL he said, “it might be the last game I get to go for a while.” This was reminiscent of his behaviour during the bushfires, sitting on a beach in Hawaii while much of the country was aflame. Every few hours I would panic, we’re fucked.

Toilet paper started being stripped in their aisles leaving gaps like missing teeth in a mouth. We sent messages to our family, how serious are you taking this whole thing? I developed new routines to feel a modicum of control, if I wash my hands even more than I have been, if I keep hand sanitiser on my person at all times, if I use my Dettol wipes on everything I touch in public, if I check the news for any new virus information, if I keep away from people maybe we will be ok. Every surface was contaminated and every person a vector.

The baby we were waiting on was slowly being weaned off their oxygen support. They initially required a machine to do that work (a ventilator) and had made it all the way to a mechanism called low flow. We were waiting on their lungs being strong enough to not need the whiff of oxygen low flow was giving. They were so close, just a tiny trickle of air, but we had learnt the difference between our best days and worst days, between life and death, when it comes down to it, it is very close. I wanted both my babies home without medical intervention. I wanted to sever all ties with institutionalisation.

Some of the hardest days were the final ones. We felt the exhausted joy of having one baby at home and the guilt of leaving one in hospital every evening. Each day we grew tenser and would alternate between the two of us being absolutely convinced we had the virus. We could bring them home on the low flow but this would mean committing to another six weeks on the machine, when in hospital they may come off earlier. In my general life, I try to embody sovereignty everyday but during those days I wanted an authority higher than myself to make the call and tell me what to do. I wanted someone to take control. Wait out the oxygen or come home? Waiting out the oxygen could take weeks. Coming home committed to at least six more weeks on a machine. On March 12 the baby that came home first underwent minor surgery at the Royal Childrens. The virus had reached the beginning of its media peak. This is what I’ll call the Tom Hanks Effect. Blasted all over the TV in the parents’ lunch room with the microwave humming in the background were reports of Tom Hanks confirmation of coronavirus. Tom Hanks was on the Gold Coast at the time. Our Gold Coast. This was my tipping point. My partner and I realized that low flow or not, we needed to have both our kids home. Once we were home, all that has been left to do is the living.

Waiting on a hero part ii

Living with no guidance in complicated circumstances is freefalling. In this freefall, I have found myself occasionally craving authoritarianism. An overreaching government does the thinking for you. I wanted this thinking done. I wanted the decision made. Even though my partner and I are ardent abolitionists, we still yearned for a sense of security to come from someone higher than ourselves. This could have come if the government had given any indication it could lead. In response to the renewed conversations about police violence and white supremacy, there are memes doing the rounds saying we also need to destroy the cop in our heads. The desire to be topped by the government was the cop in my head. The feeling of order and security had to come elsewhere.

For us the security we craved came from our friends, family and community. All we had to do was trust and get comfortable with asking for help. We don’t leave the house. Aside from a few springs onions and greens I’ve been trying to grow, everything we consume comes from the outside – chain grocery store delivery once every few weeks, vegetable box once a week, bulk foods every couple of months, a whatsapp group message, my meds dropped off by my health service, dinner dropped off by a neighbour once a week. All of this is to say that I am not an island. We are not islands. We need people to survive. And here I circle back to my great aunties and uncles. How did my aunty and uncles survive during their plague? Colonialism tries to weaken our connection to each other. Comradery is dangerous to oppressors and community is power. Isolation is a luxury. To be physically distant is a luxury. In the absence of care from a government, it is community we can rely on.

Writing in the pandemic

We are in the midst of what I hope is a global paradigm shift. It feels like the world is talking about the abolition of police and prisons in a way we haven’t before. A friend told me their Mum had asked them what abolition is. Being on this precipice is deeply painful because it is the loss of Black Lives catalysing the movement, but seeing oppressive mechanisms burn, leaving new growth and possibilities in their wake is exciting.

I don’t know that this iteration of uprisings would be possible without the pandemic conditions we are in. The pandemic has only magnified the existing fissures in society. For many it has allowed us to see the world with clarity. Our responses, who gets sick, who gets help and who gets criminalised all travel along race and class lines.

I keep finding myself asking, what is my role as a writer in all this? I am often drawn to what what Blak writer and academic Tony Birch said, “But I’m not confident that any book or piece of art has the ability to fundamentally shift many people. When people, for example, talk about climate change and the role of writers and artists – I believe in that. But if people ask, ‘Do we write more climate change fiction?’ I say, ‘No – we fucking get down on the picket line’.”